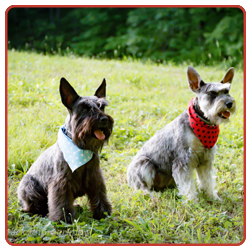 Before You Get Your Puppy

After You Get Your Puppy

We love working with:

If you are interested in any of these products below, you can purchase them online via Avidog.

Factor VII deficiency is a rare genetic bleeding disorder characterized by a deficiency or reduced activity of clotting factor VII. Clotting factors are specialized proteins that are essential for the blood to clot normally. Similar to Von Wilhelm’s Disease in people.

also known as chronic degenerative radiculomyelopathy, is an incurable, progressive disease of the canine spinal cord that is similar in many ways to amyotrophic lateral sclerosis.  Is it a late onset disease that is similar to Lew Garrett’s disease in people

Myotonia congenita is an autosomal-recessive genetic disease of dogs characterized by skeletal muscular hypertrophy. This disease has been reported in the Miniature Schnauzer, Chow Chow[3] and Jack Russell Terrier[4] and is characterized by a delay of relaxation of the muscles following a stimulus or after cessation of voluntary activity.

In Schnauzers, there is also delayed dental eruption of both deciduous and permanent dentition, crowding and rotation of premolar and or incisor teeth and missing teeth[5]. A long narrow skull with a flattened zygomatic arch and greater mandibular body curvature were also consistent findings in the affected dogs.